The plan neatly coincided with initiatives that were being worked up by British Rowing (BR) and Henley Stewards Charitable Trust (HSCT). These ideas fermented into reality and in September 2016, Phil Lyons began his two years as an HSCT Coach, based at Warrington Rowing Club.

A selection process took place to find Year 9 pupils that would take part. All the rowers would be on The Pupil Premium Register.  In total, eight secondary schools from the state sector joined the scheme providing enough athletes for a boys and girls quad from each school. 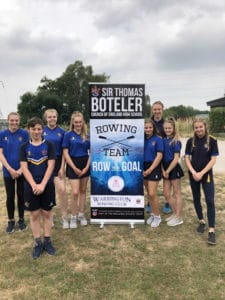 This academic year saw the WYR consolidate the excellent work that Phil Lyons had done the season before. In that first year Phil had operated on his own with some help from fellow HSCT Coach Sue Palmer. From 2017/18 WYR instigated 2 coaches per water session and this policy has carried on to the present. That winter was particularly severe and a lot of time was spent indoors on the rowing machines. To give the indoor sessions some purpose WYR organised an Indoor Rowing Competition. The Competition was staged at Priestley College and was a great success with 100 pupils from 9 schools (including Woolston Brook) taking part. As well as racing for medals the youngsters were aiming to get selected to be part of the Warrington Team at the National Junior Indoor Rowing Championships in London. This is a huge event, one of the biggest in the world and is staged by our good friends at London Youth Rowing.  The WYR team travelled by train to London and had an amazing day, racing hard and making new friends. Ellie Kadir of Culcheth High School even made the medal podium with a fantastic Bronze Medal, a first for WYR. As we moved into the summer rowing returned to The River Mersey and the athletes had a new challenge, the end of year Regatta. This was staged at Warrington Rowing Club and was a vibrant competitive event. The river banks were full of spectators that were seeing rowing for the first time and there were some very emotional supporters, watching young family and friends competing in their new sport.

This  year saw a number of changes.  We changed our age range to year 8, for a number of reasons. Pressures of the Education System meant that there was a reluctance for schools to release pupils as they got nearer to their GCSE Exams. Other factors weighed in, mainly linked to logistics but it was generally agreed that year 8 would be the way forward. There were changes on the coaching front, Phil had moved on and was replaced by Paul. We also started to bring in more part time coaches to cover the busy timetable of rowing sessions. Our Indoor Competition was going to be a move on from the previous year. We decided to use The Halliwell Jones Stadium, home of The Warrington Wolves. In theory it was a brilliant idea and it did work well but we didn’t bank on it being the coldest day of the year. We were using the corridor area under the grandstands and there was no heating. In the end well over 200 youngsters took part even though a couple of schools missed out due to poor weather conditions. It did though enable us to select another strong team for NJIRC. This event had moved to the Copper Box in the Olympic Park and the new venue really moved the competition on. Ellie Kadir managed to upgrade her bronze medal from 2018 to a silver in 2019. Once again the spring weather enabled us to get back on the river and the pupils went into training for the summer regatta.The 2019 regatta had a new trophy, it was presented in memory of Roger Chicken and it was for the best school in that particular year. Birchwood High School were the first winners.  The regatta was a great success and again there were a large number of spectators watching their first rowing event. 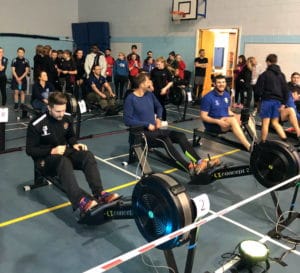 Warrington saw St Gregs Catholic High School join the scheme, taking our total to 9 schools.There was though  a big change: we opened a new site in Liverpool. This has become Mersey Youth Rowing, hosted by Mersey Rowing Club and operating from Liverpool Watersports Centre. Unfortunately the Watersports Centre had to close shortly after we started to be refurbished. This has been a dent in our plans but not a fatal blow, our hardworking coaches now take a bank of ergs to our partner schools. This process will continue till the Watersports Centre reopens in March. Currently we 5 schools involved: North Liverpool Academy, De La Salle, Cardinal Heenan, Archbishop Beck and St Hildas.